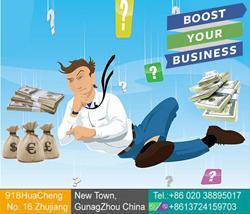 How to invest with importing from China by limited capital?

Some economists confirm including Mr. Zhu Jing, the risks and harms to import small amounts of China are larger than its benefits!

Well, but the world is evolving, giving field to other views, Today in an economic recession and reduced freight rates with the facilities provided by the Chinese government to encourage export and developments in the Chinese companies to import small quantities and successive became more meaningful than importing particularly in technical areas of large quantities, The commitment with the factories to purchase small quantities and successive provides benefit to the investor and the factory which will guarantee operation of its production at long-term lines giving it some stability, "which irks all the manufacturers", as the investor benefits will review them later.

Some may go to criticize this proposal because low quantities will raise transport and shipping documents for export and customs costs, which will reduce the investor's profits, yes this is something true is nothing wrong, but we must not forget that the investor despite the fact that its profits will decrease a bit but it will compensate This is larger than in other ways as an example:

1. Will be able to invest the difference between the value of big orders and the value of small orders and other varieties which will increase the number of products it operates.

2. Reduce the possibility of interruption "Shortage" one or some of the items from his shop.

3. Orders will be allowed to try other products more easily follow.

4. Orders relay will make an investor cargo newest rivals, "most companies are developing products and solving problems and getting at latest version gives the investor the advantage over his rivals."

5. Reduce quantities will reduce the risks, and the need for large warehouses.

I'll offer a clearer example in order to masters of Amateur figures:

Suppose an investor plans to import 2000 Tablet device planned to sell them within 60 days and that the weight of his cargo of 1800 kg, and the price EXW dollars 110,000 and the value of transportation from the factory to the airport is $ 70 "transport the value of related to weight" and porter age and certificates and shipping documents dollars 180 expenses, and freight for the entire consignment of 7200 dollars wages of and money transfer $ 140 customs clearance documents to his country is 150 dollars, "except charges does not vary with quantity."

This would be the cost of the consignment except fees and taxes "is not about quantity":

If we agree with the factory to divide this order of four orders, each of 500 kg and we left him as a deposit on subsequent Orders $ 5,000 and the in contrast.

to raise price of tablet by US $ 0.5 and thus became value the land plant 27750 US $ and transportation from the factory to the airport became $ 25 instead of 70, "weight decreased," and that certificates and shipping documents became $ 120, and freight for the entire shipment is US $ 1870 and wages of money transfers became $ 58

And Customs clearance documents to his country are 150, "except fees that do not vary depending on the quantity."

The cost of the shipment fees and taxes are an exception "is not about quantity":